PRK ( photorefractive keratectomy ) is a type of laser vision correction procedure to correct the refractive errors that is… myopia, hypermetropia and astigmatism. PRK was one of the earliest laser eye surgery vision correction procedures and has been performed longer than LASIK which has become more popular than PRK now. Similar to LASIK and other types of LVC procedures corneal reshaping is done using an EXCIMER LASER thus allowing the light rays to properly focus on the retina and achieving a clear vision without spectacles.

WHAT IS THE DIFFERENCE BETWEEN LASIK AND PRK

In both the techniques the laser used is same and corneal reshaping is also the same but the difference lies in the FIRST step. In LASIK in the first step a flap is made either using a microkeratome or a laser , the thickness of the flap varies between 90 to 130 microns and after the procedure is over this flap is repositioned back. In PRK the flap is not made, instead most superficial layer of the cornea called epithelium ( only 45 to 50 microns thick ) is scrapped /removed to expose the deeper corneal layers which is then treated with excimer laser to reshape the cornea. The epithelium regrows and repairs itself within a span of 3 to 4 days 1after the surgery. So PRK is a flapless technique and since the flap is not made, the tissue saved adds to the residual corneal stromal bed thickness thus making PRK a very safe procedure in terms of long term corneal biomechanical stability.

Who are the best candidates for PRK?…in other words what are the indications for PRK

How is PRK performed?

During PRK, a central approx. 8 to 9 mm area of the uppermost layer of cornea called the epithelium is removed either mechanically or using an alcoholic solution. This is followed by usage of excimer laser rays which very precisely reshape the corneal curvature. This is done by removing corneal tissue in microns the amount of which is proportional to number of glasses in diopters. A drug called mitomycin-c may be applied for few seconds to some patients if indicated to prevent postoperative haze. A soft contact lens called bandage lens is applied for about 3 to 4 days to promote healing and minimize pain and later on removed.

What is the recovery process with PRK?

Patients are advised to rest for a short while after which one can go home. some body must accompany to drive you back home. Post operative antibiotics and anti- inflammatory drugs are applied and prescribed to minimize post operative pain and discomfort and to accelerate healing process.

Patients are followed up the very next day, then on the 4th day to remove the bandage contact lens. Frequent follow ups are required to monitor the progress and to avoid any post op complications.

THE FINAL RECOVERY IN PRK

It takes a bit longer in PRK to recover fully, sometimes to the tune of 10 to 12 weeks. Till then one is very comfortable in carrying out the routine activities. One is able to drive within a week or two. It is important to protect the eyes from direct sunlight ( u v rays ) and one should wear a good UV protecting sunglasses.

The results obtained after PRK are quite similar to LASIK with most of the patients achieving 6/6 vision unaided postoperatively. Glasses are required to read when one crosses the 45 years age barrier due to a natural process called presbyopia. 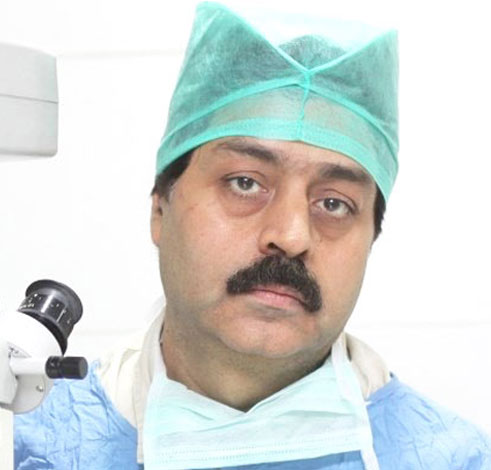 Are You a Lasik Candidate?

*Disclaimer: The content on this website (www.lasikdelhi.com) is solely for the purpose of educating and creating awareness about the domain i.e. Eye Speciality. This shall not be treated as a substitute to a professional eye surgeon's advice or prescription. Every individual and their case is different, so results may vary from person to person and we do not guarantee similar results for everyone. By using our website, you hereby consent to our disclaimer and agree to its terms.